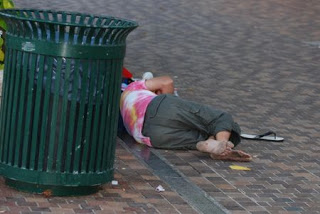 There they were. Two women in their late 20’s walking down the ocean front street in front of my house. They were followed by 7 or 8 kids, some on foot, one on a bike and two riding tricycles. They were new to town. I waved.
“Good morning”, one of the women said. Their family had passed by our house many times before. The more vocal woman had an accent that suggested that they were probably from the Northeast part of the mainland. For certain, they weren’t from Hawaii, but the family seemed to fit into our culturally mixed neighborhood of transplants and locals.
There was a certain look in the adults eyes that peeked my interest. After working outreach with people experiencing homelessness in Albuquerque, I knew that troubled gaze well. Their eyes showed that controlled fear of survival mode, that contained panic in search of a safe place to sleep. A twinge of compassion warmed my heart as I looked at the struggling family.  Seeing the kids having fun gave me hope for them.
“Yep, those are the squatters. They took over that big two level house down there,” my neighbor said as she pointed to the dwelling two blocks away. “We tried to buy that house out of foreclosure, but the bank never got back to us. These women must be very experienced at squatting because they knew just when to move in. Who knows how long they will be there.”
Many neighbors expressed fear and anger about people taking over a house that was not theirs. The broken system which favors unresponsive and uncooperative banks leaves plenty opportunity for people to squat in  foreclosed houses. My head was hot with agitation at the lack of respect of these mothers exploiting a loop hole.
“This is unacceptable,” another neighbor said. “Who’s to stop them from robbing our houses if they seem so comfortable being in a house that’s not theirs? I know for a fact that they’re not renting because I had my real estate agent look into it.” His face got noticeably red.
Another neighbor also felt angry. “There are a lot of people who come here from the mainland. They save their money to come here, and then they live off the system…you know, shelters, food stamps… They have no intentions of getting a job. The newspaper said over 40% of homeless people in Hawaii are from the mainland,” the Hawaiian auntie said with a furrowed brow. Her family had been on this land for several generations, paid their taxes, and watched more and more people become homeless in paradise.
It was a hot button issue for our neighborhood. Most people viewed anyone experiencing homelessness as a cheat, a drunk, or jobless loser. But after my work at First Nations Community Health Source in New Mexico, I knew that generalization did not hold up for most of the recently homeless. The people our team helped were more often single mothers escaping domestic violence or untreated Veterans with PTSD (Post Traumatic Stress Disorder). A spike in the number of teenagers on the street escaping sexual abuse and broken families was alarming. Perhaps the most surprising demographic was how many people with Masters degrees we were finding in shelters and couch surfing at a friend’s house.  Hearing their stories face to face opened a wellspring of empathy in my chest.  I couldn’t shame them for surviving events that were often out of their control.  In many cases, choosing to be homeless got them out of more dangerous situations.
The instant shaming of the homeless was a quick response of any prideful American. But new circumstances have produced more homeless than ever before. The recent turn in the real estate market and dishonest banks has left piles of families on the street. Half of the homeless we saw actually worked at least one job, sometimes 2 jobs. At least a quarter of all homeless lost their jobs and pension to layoffs, while a CEO jumped ship with their multimillion dollar golden parachute. Doing Homeless Outreach showed me that the growing numbers of homeless citizens were not the stereotypical untreated schizophrenics and chronic alcoholics. These days, far too many families are suffering from the mistakes of Wall Street.
But it still bothered me that these two women were essentially stealing a rental. It made our neighborhood feel unsafe. How dare they do this! Since they weren’t Native Hawaiian, their story was not connected to the painful history of this land. They weren’t the people sleeping on park benches or the friend who needed a couch to sleep on. Perhaps they were escaping abusive partners, but this did not excuse squatting.
My own judgments of these women began to surface. What were they teaching their kids?! What would happen to the kids if they were reported? Is the social and legal system equipped to handle this situation if these squatters have lived here for months already?
But for me, it really boiled down to one question. How do I protect my neighborhood, my home, yet still show compassion to these homeless children?
Your comments are welcomed here or on:
Facebook http://www.facebook.com/people/G–Kamana–Hunter/669812856
Twitter  http://twitter.com/#!/GKamanaHunter
Linked In http://www.linkedin.com/pub/george-kamana-hunter/4b/b05/13

3 thoughts on “Homeless in Paradise”