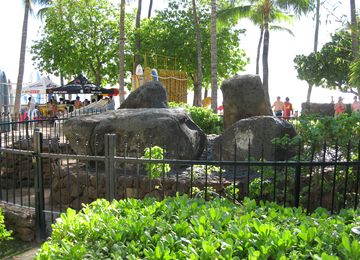 The long board beneath my feel slips back and forth. The 4 foot curl behind me propels me forward and I’m up. Calm, exhilarated, and smiling, I cruise on the wave which takes me for at least 100 yards. To my left, Duke’s restaurant. To my right, Diamond Head. Crisp, clear water below and a full bright sky above. I’m in a personal Eden.
It is my last ride of the day, and I slowly paddle to the beach. My feet crunch the sand and the Sex Wax rubs against my forearm as I carry the 8 ft beast under my arm. My nose is bombarded by scents of tanning oil and burnt skin. Suddenly, I have a craving for bacon.
This is Waikiki, the tourist haven on O’ahu. I’m only playing tourist for the weekend as I am visiting from Big Island for a graduation luau. The streets will be bumping all day and all night. Many will stumble home to their hotel rooms just before pancakes. Others will be rubbing aloe on sunburns. Some will start a tropical drink parasol collection, documenting each Pina Colada and Mai Tai they consumed.
But amongst all the action and fun making is a little recognized sacred space in the middle of the main strip. I put my surfboard down, walk over to the water fountain, and cup some fresh water into my hands. Walking over to a gated circle, I splash the fresh water onto 4 massive stones arranged on a platform. I whisper a blessing, acknowledging the personal importance of these stones. You see, well over 1000 years ago, Waikiki was a village known as Ulukou. It was there that 4 Tahitian Healers landed after they journeyed in canoes across a few thousand miles of open ocean from the island of Raiatea. They deftly maneuvered the treacherous ocean using extensive knowledge of the currents and astronomy. Today, modern sailors would never dare to make this trip without a very large ship. The fame of the Healers extended amongst many Pacific islands. Before they left Oahu, the chiefs ordered the carving of these four boulders from Kaimuki. It took thousands of people rolling the stones over tree logs to establish their new home just steps away from where the statue of Duke can be found. Each stone was blessed by one specific Healer, imbuing it with their unique Mana (spiritual power) and then named after the Healer who blessed it. The process required a month long ceremony through a full cycle of the moon. The ‘Stones of Life’, as they are called, still carry the names of the Healers: Kapaemahu, Kahaloa, Kapuni, and Kihohi.
Locals from my parent’s generation were born before Hawaii became a US state. They would hang out on the sand of uncluttered beaches, strumming their Ukeleles and surfing. At the time, the giant, ancient landmarks were mostly buried under sand. Without fully realizing it, people were stepping over a significant piece of history for the island. They were rediscovered in 1997, unearthed and honored with a plaque. Still to this day, you can find Leis and offerings honoring the medicine left behind by ancient ancestors.
Each time I visit the the shrine, I feel a surge in my blood. It’s an empowering recognition that I am a young man of modern times who is s Healer, just like them. My body is just like theirs, tall and stately as described in oral tradition. My hands reach out to them, as they are a special kind of kin. They are kin who could witness me without the need for words or categories. To them, I’m a Healer. To me, I am their humble student. What did they know? What will I rediscover?
Copyright © 2012 G. K. Hunter